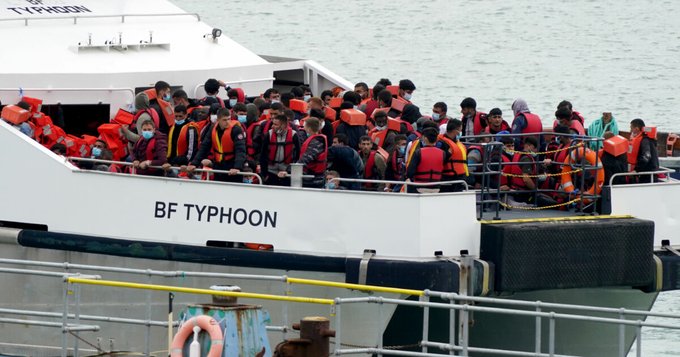 Nearly 1,300 people crossed the channel on Monday of which 700 are believed to be Albanian. Since the beginning of this year, close to 6,000 Albanians undertook the dangerous channel crossing to seek asylum in the UK. After striking a deal with the Albanian government, Home Secretary, Priti Patel, has launched a ‘rapid removal’ scheme which will see Albanian migrants flown back home on chartered planes soon after their arrival. With the help of Albanian law enforcement officers, UK immigration officials will now process asylum claims quickly and remove rejected applicants immediately. While migrant charities have been highlighting the dire poverty in Albanian, some commentators have suggested that Albanian criminal gangs are now spreading through the UK.

The UK-Albania deal to deter Albanian migrants to cross the channel includes provisions for Albanian police officers to travel to coastal Kent and assist UK immigration officers in fast-tracking asylum applications. The Albanian government has pledged to support the UK in the removal of migrants arriving in small boats. At present, nearly two-thirds of channel migrants are believed to be Albanian, although these numbers vary from day to day.

The logistics of how this collaboration will work and how soon it will start are yet to be finalised. Earlier this week, the Albanian government published advertisements across social media to deter people from making the perilous journey. According to reports, Albanian gangs have been posting offers of free journeys to the Channel on TikTok. The gangs asked people to sign up to avail of the offer. According to the Telegraph, each person can pay as much as £5,000 on arrival at the Channel to cover the cost of the 22-mile journey to the UK.

A source for the Albanian immigration services said:

“The Albanian gangs provide the people and link up with the Kurds, who provide the boats and the logistics.

“The Albanians are coming for economic reasons.

“There is huge poverty in Albania, and they want to get to the UK for a better life and good employment.

“Most end up working in the black market, especially in construction.

“Some of them – especially the younger boys – get involved in criminality, working in cannabis farms, to pay off the £5,000 they have paid for the crossing.”

To stem the stream of emigration, the Albanian government has also taken to social media, publishing ads to deter people from heading to the UK. The ads are visible to Albanians in France and Belgium. Because they are travelling through safe countries, their asylum requests will be invalid under the Nationality and Borders Act. Over the past few months, many Albanians have been claiming ‘modern slavery’ in their applications thus blocking the Home Office from removing them.

After spending millions of pounds on the Rwanda scheme, which has yet to see one single deportation, Priti Patel may have to square up to opponents once again. Pro-migrant campaigners may table legal challenges to her latest efforts too.

“Large numbers of Albanians are being sold lies by ruthless people smugglers and vicious organised crime gangs, leading them to take treacherous journeys in flimsy boats to the UK.

“This abuse of our immigration system and people risking their lives cannot go on. Thanks to our excellent levels of co-operation with Albania, we will take every opportunity to speed up removals of Albanians with no right to be in the UK.”

The Albanian government is particularly concerned about the large number of young men emigrating. To curb this exodus, officials, now in collaboration with British personnel, are in the process of creating training and education programmes for young people, especially in the poverty-stricken north of the country.

Both Albanian and UK officials hope that the new fast-track scheme involving police officers from Albania will minimalise the time Albanian asylum seekers spend on UK shores, thus removing the possibility of law firms providing them with legal advice.

Amnesty International has put the high number of Channel migrants down to a lack of safe and legal options. The human rights organisation has urged the government to open up safe passageways for asylum seekers and migrants.

“With there currently being no safe means of reaching the UK, those fleeing war and persecution have had no choice but to attempt these perilous crossings​ even though many people have died.

“In global terms, the UK receives and provides safety to comparatively few refugees, yet the Home Secretary and her officials have tried to give the entirely false impression that the Channel crossings are some sort of national emergency.

“Instead of plans to criminalise people for seeking safety, the Government should be opening up safer routes for those seeking asylum – not raising the drawbridge and driving vulnerable people further into the hands of people-smugglers.”