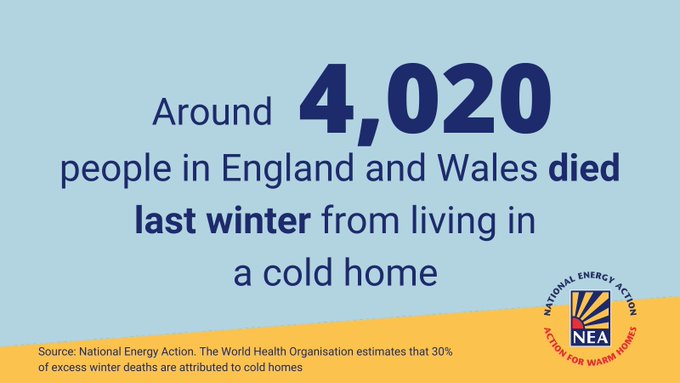 Almost 100 charities have sent a letter to Jeremy Hunt urging him to introduce a social energy tariff to protect low-income households. In an open letter to the Chancellor, they warn that the end of the universal energy support scheduled for April “will leave many older and disabled people in increasingly desperate situations”.

95 charities and non-profit organisations have issued a call to the government to introduce a social energy tariff to support older and disabled citizens. Independent charity National Energy Action (NEA) which monitors fuel poverty across the UK compiled a report to assess the current energy crisis. After investigating the impact of rising energy costs, the authors of the report back the introduction of a special rate for low-income households.

NEA figures suggest that escalating energy costs have pushed 6.7 million households into fuel poverty.  The charity now fears that after the withdrawal of energy supports this coming April, an additional 8.4 million households will struggle to pay energy bills. Age Action UK research revealed that nearly one-quarter of people over 60 feel they cannot heat their homes as much as they would wish. The same is true for 27 per cent of people living with a disability.

“In April what’s going to happen is the support that the government’s been giving everybody, but particularly vulnerable households will end.

“At the same time, energy prices will jump by about 40% because the government will change the structure of the energy price guarantee and the price cap will go up.”

In the letter calling on the government to introduce a special tariff for the most vulnerable, the 95 charitable organisations have also urged the Chancellor to “consider a progressive funding mechanism which ensures those missing out on the social tariff do not have to bear its costs”.

The letter goes on to state:

“In our view, this kind of targeted support should be automatically made available to
those who need it including: people on means tested benefits, disability benefits, and
Carer’s Allowance alongside those still struggling with their bills but missing out on
support from the welfare system. It also gives the opportunity to remove unfair
differentials between different geographies and payment types that currently exist in
the market for low income and vulnerable households.”

The letter’s primary signees include the National Energy Action, Age UK, Scope, Fair by Design, and Energy Action Scotland with a further 90+ charities adding their name.

Speaking at one of the events of the World Economic Forum in Davos, Shadow Chancellor Rachel Reeves outlined Labour’s approach to the energy and price crises whilst accusing the government of “walking into crisis to crisis unprepared every time.”
On the withdrawal of energy costs supports, the Shadow Chancellor said:
“We must hold to that most basic of principles: That those who have profited from the windfalls of war should share their part of the burden in reducing the cost for others, so ordinary people do not have to bear the brunt of a crisis that they did not cause.”
A Labour government would, she continued, “extend the windfall tax, closing the fossil fuel investment loophole, and taxing oil and gas giants at the same rate at which they’re taxed in Norway.”
Labour would then use the £13 billion generated to help vulnerable families. In her keynote speech at the Fabian Society Conference, Reeves outlined the opposition’s plan to support people through the cost of living crisis. Apart from extending the windfall tax, Labour also wants to introduce a three-month ban on the compulsory installation of pre-pay electricity meters.
Both Reeves and the Labour leader pitched the UK opposition as a frontrunner in green policies and called on other governments to join in the creation of a “clean power alliance” tasked with lowering energy prices.
Responding to the suggestion of extending the windfall tax, a senior Conservative said:

“Labour are so devoid of ideas that they are simply re-announcing the same inflation-fuelling policies as before.

“Only yesterday did Keir Starmer describe a windfall tax as a ‘sticking plaster solution’ to the energy crisis. Labour’s plans are not only unworkable, they would raise a fraction of the sum they say.”

“If you undermine those companies now, and send the sector’s 200,000 skilled workers into other industries, you will damage both the nation’s current energy security and our hopes of a rapid transition to low-carbon energies.”