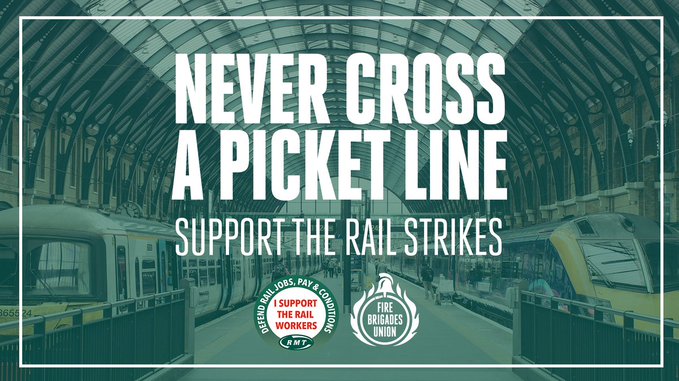 Commuters will face more travel disruptions throughout the summer as new rail strikes are on the horizon and train drivers at nine companies are set to walk out. After talks to agree on jobs, pay and conditions ended without resolution, 40,000 rail workers laid down tools again on Wednesday, leaving thousands of commuters stranded. Some areas had no trains at all with only one in five trains operating per schedule.

The next few weeks will see more travel chaos. On 30 July, the first day of the new Premier League Season and two days into the Commonwealth Games, train drivers at seven rail companies will go on strike. Two weeks later, on 13 August, the drivers at nine ASLEF companies will strike, while on 18 and 20 August RMT staff will join Transport Salaried Staffs’ Association (TSSA) in strike action. And if that wasn’t enough, London tube workers are planning a one-day strike on 19 August over pensions and jobs.

On Wednesday, commuters all over Britain had to endure more travel disruptions as only one in five trains operated. Failed negotiations between the unions and Network Rail led to fresh action. The 24-hour strike left many regions of the UK without any train services at all. Around 40,000 Network Rail workers of the RMT and TSSA unions working at 14 different train companies downed tools leading to the cancellations of hundreds of trains with some networks shutting down altogether. The three-day strike action last month brought severe travel disruptions for commuters.

Talks broke down when Network Rail offered a 4 per cent pay rise which unions have described as “paltry”.

“Our members are more determined than ever to secure a decent pay rise, job security and good working conditions,” RMT general secretary Mick Lynch said in a statement.

“Network Rail have not made any improvement on their previous pay offer and the train companies have not offered us anything new.”

With inflation set to rise to 11 per cent by the end of the year, union representatives told the Guardian that the 4 per cent offer was equal to a pay cut.

But Network Rail’s chief negotiator, Tim Shoveller hit back saying the rejection of the offer was “staggering” on the back of “some constructive conversations”, urging unions to return to the negotiating table.

“[It is] a good solid pay rise and we’ve met the other things they told us were really important to them, like a guarantee of no compulsory redundancies, and that changes would be agreed with them. They were the three things in dispute with us and we’ve met every single one of them.

“My main message to the RMT is, get back around the table, let’s get this productivity agreed and let’s make sure this deal is put in front of our staff so they get an opportunity to vote on it. I think the vast majority of our staff would agree, this deal if the RMT were to agree to ask them.”

In response the RMT said that workers in other transport companies had secured no-strings-attached pay increases:

“It is not accurate to say that Network Rail’s offer is ‘a good solid pay rise’. Last year London Underground members secured a pay deal of 8.4% and Merseyrail members have just won a 7.1% pay rise with no strings attached.”

Unions are also unhappy about planned job cuts, arguing that Network Rail is likely to scrap as many as 2,500 maintenance jobs. Network Rail responded by saying all of the maximum 2,000 redundancies would be voluntary.

Tory leadership favourite, Liz Truss, who has vowed to put an end to travel disruptions with tough new legislation, has already earned the wrath of Mich Lynch, the most high-profile union leader. He told the i newspaper that the legislation would ignite an “enormous response from the trade union movement.”

“We need coordinated and synchronized industrial action against what they’re proposing. I would be looking for a general strike if we can bring that off, but it’s up to others.”

Truss is proposing to force a minimum service level during strike action days, while also raising the strike ballot approval from 40 to 50 per cent. In a statement via her campaign team, Truss said on Monday:

“I will do everything in my power to make sure that militant action from trade unions can no longer cripple the vital services that hard-working people rely on.”

A general strike can only be called by the Trades Union Congress (TUC) and would involve significant numbers of workers across multiple sectors.

Keir Starmer has sacked shadow transport minister, Sam Tarry, over statements he made on Sky News and for taking part in rail worker support demonstrations. The gap between the right and the left within Labour is again blatantly obvious.

An all-out row has ensued with some Labour MPs feeling they should be allowed to openly support pickets and join the call for pay increases while Keir Starmer has banned doing both.