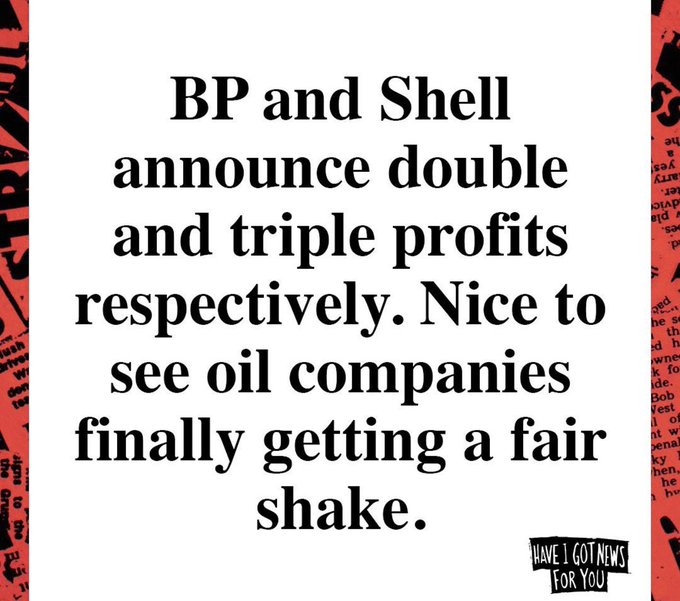 Rishi Sunak appears to be warming to the idea of a windfall tax. Previously, he and the Prime Minister had rejected the idea of introducing such a tax, fearing it may repel investment and reduce dividends on pension funds. But escalating living costs, the urgent need to support struggling households, and insufficient investment on the part of energy giants have put the tax back on the table.

A windfall tax is a one-off levy a government imposes on companies that recorded significant profits through no special efforts on their own part. Imposing it now on energy corporations in a climate of rising energy prices and rocketing profits would seem appropriate.

At a time when people are bearing the brunt of rising fuel costs, companies like BP and Shell have recorded enormous profits. A windfall tax would, according to Labour estimates, bring in up to £2 billion which could be used to ease the pressure on household budgets.

Labour had already floated the idea in its 2019-manifesto, suggesting that the money raised could pay for investment in green energy infrastructure.  While the government had previously dismissed imposing a windfall tax on large energy providers, doing so now appears to be an option again. Speaking to the Mail, the Chancellor said:

“With regard to a windfall tax we keep all options on the table and what I want to see is the investment come forward. I want to see these companies investing in the UK.”

Lack of reinvestment by energy giants may sway Sunak

The first three months of this year have been exceedingly profitable for both BP and Shell with profits of £4.9 and £7.3 billion respectively. Both companies have pledged major UK investment for the years leading up to 2030, but a recent Treasury analysis doesn’t point to any change in investment trends. In fact, total investment in the North Sea is down 90 per cent when compared to 2014.

And it is this lack of investment that has now made a windfall tax an option once again. According to the BBC, Rishi Sunak is still weighing it up, especially if energy companies fail to reinvest some of their massive profits in the UK. Only last week, Boris Johnson warned that imposing a windfall tax has the potential to endanger UK energy supplies.

But in April, the Chancellor said in an interview with Mumsnet that a failure to invest on the part of the energy companies would mean that the one-off levy would be “something I would look at”.

One Treasury official told the BBC that the fact that the Chancellor’s words feature in the main text of the Treasury windfall tax probability study indicates a certain “leeway” on the matter.

How much would a windfall tax bring in?

Labour has had to readjust its previous windfall tax gain estimates from £1.2 billion to £1.95 billion. As of now, North Sea gas and oil companies must pay 30 per cent of tax on their profits as well as a ten per cent surcharge. Labour proposed raising it to 40 and 10 per cent and calculated the intake.

The Labour estimate adjustments come on the back of new Office for Budget Responsibility (OBR) forecasts and the March Spring Statement which took the impact of the Ukraine war on fuel prices into account.

Earlier this year, the OBR forecast gas and oil tax receipts to jump to £13 billion for the year up until April 2023, putting them far above the £9.6 billion received before the pandemic.

Analysts now say that the current rise in fuel prices is likely to put the gain of a one-off levy beyond £2 billion.

In the light of decade-high profits of nearly £5 billion for the first three months of this year, it is hardly surprising that BP chief Bernard Looney described his company as a “cash machine”. When asked about continuing investment in the face of a windfall tax, Looney told journalists that BP would go ahead with all UK investment whether or not the government imposed it.

Meanwhile, the head of Shell, Ben van Beurden, said that “a stable tax and regulatory environment” would help his company’s investment programme.

According to the BBC, Shell and BP have paid almost no tax on the profits of their North Sea operations in recent years because they were able to put the cost of dismantling old North Sea infrastructure against profits earned.

Imposing a windfall tax is not something the government would readily do. But the current cost of living crisis may just spark another government U-turn. The debate is continuing with more and more voices demanding the introduction of the levy.

Last week, Tesco’s John Allan said that the case for the windfall tax was “overwhelming in the face of the genuine hardship he was seeing reflected in stores”.

And one gas and oil executive admitted:

“It’s clear this debate is not going away. I don’t think the chancellor wants to do it but the political pressure is clearly there”.