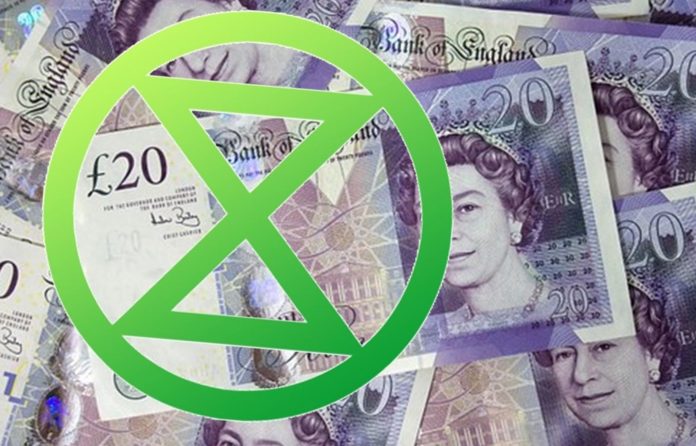 As children led millions of protesters calling for action to tackle climate change around the world, the UK government hailed a major expansion of new wind energy projects and record low costs in the sector.

The 12 new projects include offshore wind energy schemes which will net the royal family tens of millions in income because they own exclusive rights to the seabeds around the British Isles.

Leases to four areas of the seabed will be auctioned by the Crown Estate to developers, and it is hoped the wind farms will generate enough power for six million homes by delivering 7GW of electricity.

Environment as important as the economy

The government heralded the record low costs of offshore wind power at the same time as millions of climate protesters in over 150 countries called for meaningful action to address the climate crisis.

A spokesman for the polling company YouGov told BBC Radio 4’s Six O’clock News of a recent and dramatic increase in the importance of the environment as a major issue in the next general election. He said: “In our most recent issues tracker, it was seen as being just as important as the economy in the minds of the British public.”

Roger Harrabin, the BBC’s energy and environment analyst, said the strikes and protests “already have made a difference” by giving politicians “political legitimacy” and “confidence” to act on climate issues and make actual change.

He said: “In the UK, although it’s doing well, in terms of its electricity, there is still major problems with the government in getting emissions from transport and housing down.”

Prime Minister Boris Johnson said: “The UK is leading the way in the fight against climate change, and it’s great news that millions more homes will be powered by clean energy at record low prices.

“Seizing the opportunities of clean energy not only helps to protect our planet, but will also back businesses and boost jobs across the UK.”

The government has committed to paying wind energy providers between £39.65 and £41.61 per megawatt hour under the Contracts for Difference (CfD) programme. That is half the £80 price that applied to the first round of CfD four years ago, and well below the government’s forecast market price, meaning subsidies for wind power may not be needed.

The “record low prices” for new renewable energy projects were hailed as “truly extraordinary” by Simon Virley, UK head of energy and natural resources at KPMG.

He added: “The government has secured almost 6GW of new renewables capacity, without spending any of the £65m budget allocated for this auction, due to the record low clearing prices. Giant offshore wind projects will now be built in the North Sea effectively ‘subsidy free’.  This raises the prospect of offshore wind contributing even more than previously envisaged to achieving the UK’s Net Zero emissions target by 2050.”

Under CfD the government provides a guaranteed price for electricity and conducts an auction system where renewable energy developers with the lowest costs are awarded 15 year long contracts.

The contracts help companies attract investors seeking reliable returns, which in turn helps the renewable energy developers secure more finance. If the wholesale price of energy falls below the “strike price” stated in the CfD, the developers get the difference from funds generated from electricity consumers’ bills, and not from the government.

The next round of CfDs will be awarded by the UK government in 2021, while the Crown Estate’s auction of leases for windfarms – their first in a decade – is expected to attract bids from established renewable energy companies as well as massive oil companies.

The Crown Estate is a limited company that manages the hereditary estates of the British Crown, including office, retail and industrial properties as well as housing, forestry, farmland, minerals, and of course, the sea bed.  Their website states: “We play an active role on the seabead around England, Wales and Northern Ireland, including offshore energy, marine aggregates, and cables and pipelines.”

Profits generated by the estate go to their overseer, the Treasury who returns 25% to the royal family as their sovereign grant.

The auction could result in some £20bn investment, and the Crown Estate said the first seabed rights could be awarded in early 2021. They collected £41m in royalties for use of their seabeds in 2018, equivalent to 2% of revenues.

However, as Carbon Brief points out, this downwards trend will soon reverse as “demand is expected to double as [energy for] heat and transport [switch from fossil fuel and] are electrified.”

Renewable energy generation provided a third of the total power used in the UK in 2018, with wind accounting for 17%, solar 4% and biomass (burning of plant material and food waste) 11%.

In 2008, burning fossil fuels provided around 80% of the UK’s electricity. In 2019, coal now accounts for less than 5% which is generated by nine power plants that by 2025 will have been shutdown by the government.

Gas generated power provided 39% of electricity. – There are 39 CCGT (Combined Cycle Gas Turbine) power stations in the UK and one OCGT (Open Cycle Gas Turbine)  Many of these will be retired by 2030 but there are plans to replace them with double the capacity. However, in order to meet the UK’s climate goals, gas will have to be cut to less than 25% of the total electricity generated.

The UK’s eight nuclear power stations generate around 20% of the total. All but one of the nuclear power plants will be closed by the 2030s and only one new plant, Hinkley Point C, is currently being built. It is expected to cost more than £20bn – twice the price quoted by EDF Energy in 2008 – and will add between £10 and £15 per year to electricity bills for 35 years.

EDF Energy will be paid at least £92.50 per megawatt-hour generated at Hinkley Point C, considerably more than UK’s wholesale average of between £55 and £65 per megawatt-hour in 2018, and the amount paid to wind power developers.

Renewables are set to fill the gap left by the closed fossil fuels and nuclear energy plants. The government pledged in March to provide a third of all UK electricity from offshore wind projects.

Massive growth in battery storage sites will see the current 0.7GW expand to more than 3GW by the early 2020s with some 5GW having already received planning permission.