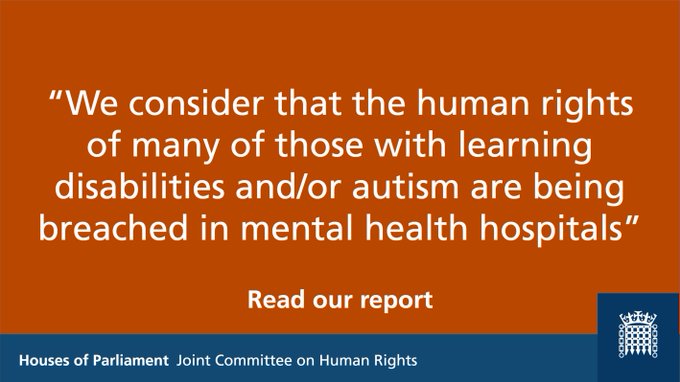 The JCHR report on the detention of young people with disabilities &/or autism has been published and makes for shocking reading. The UK Parliament Human Rights Committee has urged the government to take action, highlighting grave human rights abuses. The report is available to download on Twitter with its chair, Harriet Harman tweeting this morning:

“It has been left to the media & desperate parents to expose the brutal reality of our system of detention of people with learning disabilities or autism. … What we saw does not fit society’s image of itself as one which respects everyone’s human rights.”

Condemning the “horrific reality” of the treatment and conditions some young people with autism and/or disabilities face in mental health hospitals, the MPs involved in compiling this report have spoken of the “terrible suffering” experienced by those detained and their families. Following their inquiry, the committee has little confidence in the Care Quality Commission, stating that “a regulator which gets it wrong is worse than no regulator at all.” Furthermore, the Committee has stressed the importance of listening to family members, urging agencies to consider them “human rights defenders” rather than the problem.

The first chapter of the report contains harrowing witness reports including one from Julie Newcombe whose son was detained for 19 months:

“He had his arm broken in a restraint, the right humerus bone. His arm was wrenched up behind his back until the bone snapped. He was then not taken to accident and emergency for 24 hours, even though his arm was completely swollen.”

For most young people in detention, the Committee identified a predictable and “grim” course of events. Initially, the family struggles to cope with a child and raises concerns with the GP but is left waiting for an assessment. Usually, a trigger event warrants intervention. The child is taken away from the family without family consultation. Often, the child is in detention miles away, and when worried parents raise concerns, they face hostility. The child then ends up staying in detention for months and sometimes years.

Removing the child from familiar surroundings and separating it from loved ones unsettles the child. The child gets worse and receives punishment in the form of solitary confinement.

Throughout the report, the JCHR’s lack of confidence in existing structures, agencies, and laws emerges clearly. The Committee accuses the government of a ‘lack of political focus and accountability to drive change.’ Moreover, the Committee feels that detaining young people with disabilities and/or autism is often inappropriate and in many cases damaging. Agencies often fail to include families in the process, opting to shut them out of the process instead.

“This inquiry has shown with stark clarity the urgent change that is needed and we’ve set out simple proposals for exactly that. They must now be driven forward, urgently.”