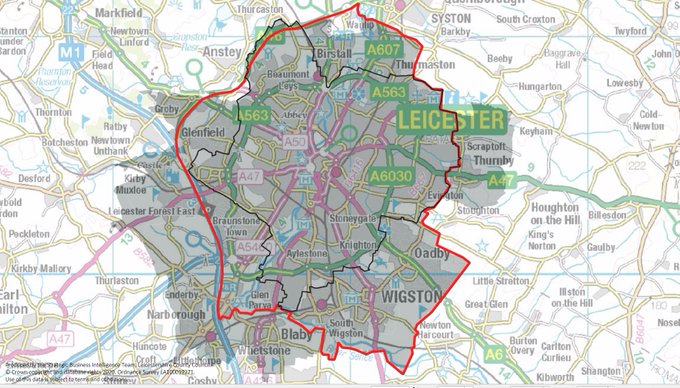 The Leicester lockdown mirrors localised lockdowns across the globe. In the US, some states are re-imposing restrictions, and many countries around the world have reacted to a resurgence of COVID19 infections by closing down affected regions. Bejing residents have to abide by strict rules once again as do the citizens in and around the German meat factory in Gütersloh. Such has the economic outfall from the first lockdown been that governments are likely to try to avoid nationwide lockdowns at all cost. Instead, they will use track and trace systems to cordon off areas with new outbreaks. They hope to ward off a widespread second wave of coronavirus infections.

The map highlights that apart from Leicester city centre Blaby, Oadby, and Wigston are also re-entering lockdown with non-essential shops shutting their doors and schools only open for vulnerable children and the kids of essential workers. When the rest of England sees a further easing of restrictions such as pubs opening on the 4 July, the people of Leicester will once again need to stay at home. Although no legal basis exists to enforce a localised lockdown, the government is confident that businesses and people will accept and abide by the lockdown rules.

Local Leicester politicians and the Mayor of Leicester have slammed the government for delays in reporting infections to local authorities. Although the government publishes daily figures, local governments only receive hospital death numbers with the remainder of the fatalities reported with a delay of more than ten days.

While authorities in Leicester reported 80 positive coronavirus tests between 13 and 26 June, the Health Secretary, Matt Hancock, said that that there were, in fact, 944 when announcing the localised lockdown.

“I would wish that they had shared that [data] with us right from the start.”

“And I wish they had taken a more speedy decision rather than leaving it 11 days. That’s a long gap and a long time for the virus to spread.”

“If I don’t know who is being tested, and getting positive tests, in the community because one of the major elements of the testing system isn’t currently sending me complete and reliable intelligence . . . it actually hampers our ability to get ahead of the curve on outbreak management.”

The government has since promised to work more closely with local authorities and speed up the data reporting.

According to Sky News, the Department for Health and Public Health England are focusing on 36 regions where the number of COVID19 infections is on the rise with a localised lockdown a distinct possibility. Several boroughs in London, Bradford City and Doncaster, are among them, as well as all of the following boroughs:

With a high number of BAME communities living in the affected areas, some now believe that a second lockdown is necessary to protect an already vulnerable group. Overcrowded living conditions and frontline employment have contributed to the pandemic hitting members of the BAME community hardest.

Welsh independence march – time to have a discussion about the Union?

Carrie and ‘the glass of wine’ with BJ. Are we the biggest suckers?

Welsh independence march – time to have a discussion about the Union?

Carrie and ‘the glass of wine’ with BJ. Are we the biggest suckers?