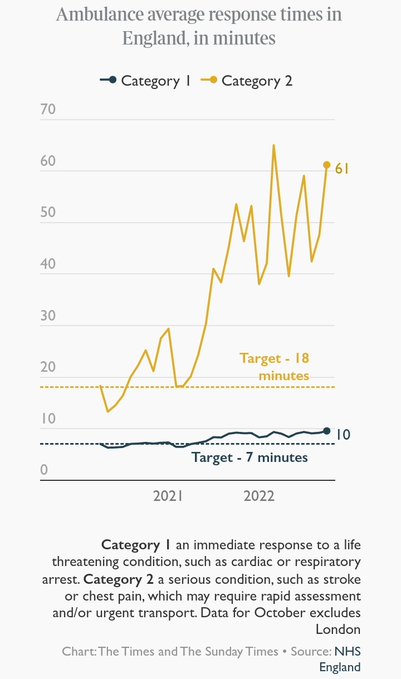 It had been hoped that NHS services would return to pre-pandemic levels early next year.  Cancer services were to be expanded by 30% in 2024/25. But a report by the National Audit Office (NAO) now paints a bleak picture of the NHS backlog. It concludes that the health service would need to experience “a rate of growth not seen in recent times” to come to grips with waiting lists.

Plans to cut down NHS treatment and cancer care waiting lists appear to be in dire straits. A report by the NAO, an independent spending body, cites serious staff shortages, overreliance on GPS, and productivity issues as the core obstacles. Inflationary pressures are also impacting severely and absorbing additional government funding The report warns that NHS’s post-Covid recovery plan is in jeopardy.

Currently, the NHS is operating at 96% of its pre-pandemic capacity. Health management had hoped to reduce the number of people waiting on urgent cancer care for more than two months to pre-Covid levels by March 2024. By 2025, they had planned to eliminate wait times for elective treatments of more than one year.

According to the report, the NHS wants to cut outpatient appointments by 1.7 million replacing them with hospital-assisted GP care. But the NAO warns that even if this was achieved, the NHS would still need to deliver 7% more care each year.

New community diagnostic centres carried out 1.8 million tests between July 2021 and September 2022. To reach March 2023 diagnostic targets, they would need to conduct an additional 1.9 million tests.

Targeting a 25% reduction in outpatient appointments, NHS management wants to cut down on hospital follow-up visits. This has led to fears over patient safety among healthcare professionals.

A 16% reduction in productivity seen in 2021 when compared with previous years was cited as a “major” problem by the NAO. More sickness among staff, less willingness to do overtime, and the redeployment of NHS workers to different teams have meant that NHS workers are carrying out fewer procedures.

Gareth Davies, NAO head urged the NHS to be “agile” in the implementation of the recovery programme.

“Officials, clinicians and managers both nationally and locally are committed to improving the service patients experience. Nevertheless, activity so far in 2022 has continued to lag behind the pre-pandemic level and is well below the planned trajectory. To a significant degree, this is due to an operating context that is more difficult than NHSE allowed for in its plans.”

“The NHS’s funding package is being eroded by inflation so that its overall funding up to 2024-25 is set to grow more slowly than the long-term average in real terms.”

In a rebuttal of Davies’ comments, an NHS spokeswoman said the health service was “on track”, having all but eliminated “two-year waits for care and reducing 18-month waits by almost 60% in a year”.

Speaking to reporters, she said:

“Staff have achieved this despite higher staff absences, more COVID-19 patients in hospital this summer than the last two combined, reduced hospital capacity caused by social care issues discharging patients back into the community, and increased demand on urgent and emergency care services.”

Health Secretary, Steve Barclay, said that hospitals must prioritise patient safety and change the way they operate. Delayed hospital discharges are believed to cause serious blockages in the system.

During the week, an average of 10,000 get to leave the hospital, but at the weekend, this number drops to 6,800. Mr Barclay told the Telegraph:

“What manifests as a problem in ambulances is often caused elsewhere in the system. If it’s the blockage in the pipe in terms of delayed discharge, that is creating pressure on the hospitals.

“In hospitals at the weekend, that discharge drops, so the question then is – what is within the trust’s own control?”

“My committee previously warned the Government against over-optimistic plans,” she told reporters.