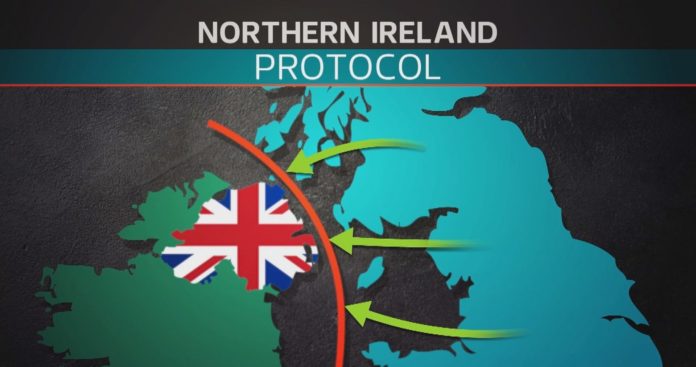 On Wednesday, the internationally controversial NI Protocol Bill passed through the House of Commons and is now due for reading in the House of Lords. The government has said the Bill is a “top legislative priority”, while its detractors fear it will breach international law and taint Britain’s global reputation.

Its third reading completed, the NI Protocol Bill is now moving to the House of Lords where peers are likely to seek amendments leading to a potential showdown between the two chambers after the summer recess. 267 MPs voted in favour while 195 voted against the bill. The NI Protocol was created to avoid a hard border in Northern Ireland and maintain the integrity of the EU common market. This has meant checks on goods travelling from Britain to Northern Ireland, a thorn in the side of both, the Brexiteers and the DUP. In staunch opposition to the Protocol, the party has refused to enter government with Sinn Fein and re-establish the Northern Ireland Executive.

The UK government has time and time again stated that the NI Protocol Bill would safeguard peace and stability in the region as well as protect the Good Friday Agreement. The Bill will remove checks on goods and on plant and animal products between mainland UK and Northern Ireland.

The Tory party’s Brexiteers have welcomed the results of yesterday’s House of Commons vote. Speaking to Express.co.uk, deputy leader of the European Research Group, David Jones said, the Bill would allow the UK to “complete taking back control”. He added:

“The point about it is, if the European Union had negotiated in good faith, we wouldn’t have needed to do this, because they acknowledged the Protocol is not working as it should.

“And yet, they refused to do anything to amend it so clearly we had no choice but to put our national interest first and that’s what we’re doing.”

The EU has widely criticised Britain’s action and its failure to check goods entering NI from Britain. Earlier this year, it initiated infringement proceedings against the United Kingdom. These proceedings were paused to allow the UK to properly establish and run checks on agricultural products entering Northern Ireland from mainland Britain. The bloc may now refer the issue to the European Court of Justice. If the court finds against Britain, fines are the likely outcome. The EU resumed legal action after the publication of the Bill.

It’s not just the EU that is challenging the legality of the bill. Former PM, Theresa May vehemently opposed it:

“This Bill is not, in my view, legal in international law, it will not achieve its aims, and it will diminish the standing of the United Kingdom in the eyes of the world and I cannot support it.”

With amendments, Labour had attempted to “prevent a brazen ministerial power grab”. Stephen Doughty, shadow foreign secretary warned of the “fallout”. In the House of Commons, he said:

“It (the Bill) proposes a complete abdication of responsibility from resolving challenges that they themselves have created.”

“We will also find this legislation, I am certain, being prayed in aid by despots around the world as they seek to escape their own obligations under international law.”

In a warning to peers in the House of Lords, Sir Jeffrey Donaldson, the DUP leader, said:

“Do they want to protect the Belfast or Good Friday Agreement and restore stability in Northern Ireland, restore the consensus that is required for that agreement to operate, or not? I put that choice to them and I hope they will be wise in the decisions they have to make.”

For its part, the SDLP is eager to get Stormont back up and running. Colm Eastwood told the House of Commons: