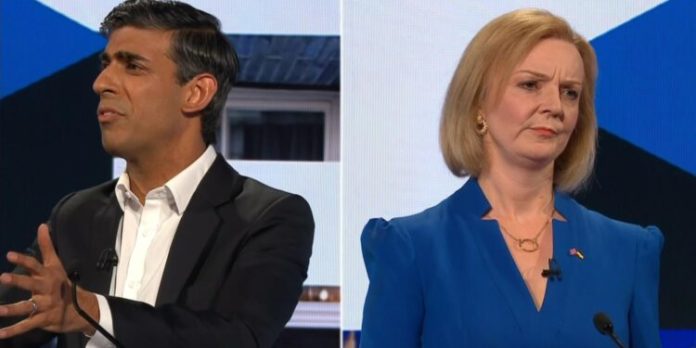 As the leadership race enters its final phase and the Truss campaign continues to gather momentum, the candidates’ stance on the Northern Ireland Protocol is worth examining. While Truss was the architect of the legislation to scrap it, Sunak has now vowed to fix the Protocol. Meanwhile, a poll puts Truss well ahead of Sunak. However, anyone interested in the Truss v Sunak tussle may not like hearing that for one, Johnson is still the majority of Tory voters’ favourite, and secondly, whoever succeeds him will lose to Starmer at the next general election.

Truss, who voted Remain in 2016, last night accused Sinn Fein, the Welsh Labour Party, and the SNP of playing politics with the union, pledging to call a halt to ‘constitutional divisions’. For his part, Sunak has said that he would seek to renegotiate the NI protocol with the European Union, much to the dismay of the DUP.

The question of the Northern Ireland Protocol was always going to feature in the Truss v Sunak race. Ironically, the two candidates could be seen to have swapped sides. Sunak, who voted Leave, has supported nearly all pro-Brexit policies since then. He is now favouring renewed efforts to come to an agreement with the EU. Truss, however, having won favour with the Tory Party’s European Research Group (ERG), is now championing hard-line Brexiteer views. She has pledged to do away with all residual EU legislation by the end of 2023. This has earned her the support of the older generation of Tory Party members as well as the DUP. To say her stance is politically driven will do little for the majority of people in Northern Ireland who have no issue with the Protocol. Controversially, she once ridiculed the burden of a no-deal Brexit on Northern Irish businesses as only impacting  “a few farmers with turnips in the back of their trucks”.

Presenting herself as someone who ‘gets things done’, she has been claiming the legislation to scrap the Protocol as proof of her ability to deliver. But the controversial legislation and the possibility of a stand-off with the EU is in stark opposition to the views of most NI parties, the NI farming community, as well as the Northern Ireland business community. They fear instability and a risk to the hard-won peace settlement. The DUP who earlier this month refused to elect Michelle O’Neill as First Minister and get Stormont back up and running is the only party in Northern Ireland to fully support Truss’ views and actions.

The Bill remains controversial with many experts viewing it as putting the UK’s international standing in jeopardy for essentially breaking international law. Truss’ plan to replace nearly 2,500 pieces of EU legislation by the end of next year could have consequences far beyond Northern Ireland.

At the helm of the Conservative party, Truss could scrap hundreds of pieces of legislation pertaining to the protection of the environment as well as to employment overnight. To push through the legislation allowing the UK government to transfer asylum seekers to Rwanda, she has gone as far as hinting at the possibility of withdrawing from the European Convention on Human Rights (ECHR).

Outlining his vision for Northern Ireland in a Belfast Telegraph article, Rishi Sunak vowed to “push the EU to come to the table once more”, saying that this would take less time than waiting for the Protocol Bill to become law:

“I am an experienced international negotiator. I will bring the contacts and know-how to I gained from that to the negotiation.”

Speaking to The Times, Sunak reiterated his pledge:

“So I hope as the new prime minister I can sit down and have a constructive relationship with the Irish, French and European governments to make sure we can try and see if we can find a constructive solution to this problem.”

As expected, the DUP reacted angrily with MP Jim Shannon casting doubt on Sunak’s ability to broker a deal where many others have failed:

“With respect to Rishi Sunak, is he a good negotiator? He probably is.

“We’ve moved on, and moved on greatly” from negotiations with the EU because its representatives have “refused to come to a workable solution.”

“At the end of the day, we’re aiming at something which is achievable, and she’s grasped it. And I’m afraid Rishi hasn’t.”

Truss puts herself forward as a champion of the Union

Liz Truss has hit out at the devolved governments of Northern Ireland, Scotland, and Wales, vowing to deliver for all of Great Britain and prioritise the integrity of the Union:

“Having grown up in Paisley before going to a comprehensive school in Leeds, I consider myself a child of the Union. When I say I will deliver for our country, I mean all of it.

“As prime minister, I would also hold the role of Minister for the Union and seek to strengthen it.”

According to the Telegraph, Truss believes that ” for too long, people in parts of our United Kingdom have been let down by their devolved administrations playing political games instead of focusing on their priorities.”

“We are not four separate nations in an agreement of convenience, as some would have us believe. We are one great country which shares a history and institutions, but also family and friends, memories and values.

“I would ensure that our entire family continues to get the attention, support, and investment that it deserves.”

There’s little love lost between Truss and Nicola Sturgeon with Truss accusing Sturgeon of being an ‘attention seeker’ and Sturgeon, in turn, revealing that Truss asked her how to feature in Vogue.

Meanwhile, Sinn Fein’s Pat Finucane has hit back at Truss in the Belfast Telegraph:

“Liz Truss serves in a government that dragged us out of the EU against our will, imposed austerity and cruel cuts to public services over 10 years, broke international law and is now threatening to tear up the Protocol, an international agreement they themselves negotiated.

“They are also giving cover to the DUP to block an Executive being formed at a time when workers and families are struggling with the rising cost of living and our health service is on its knees.”