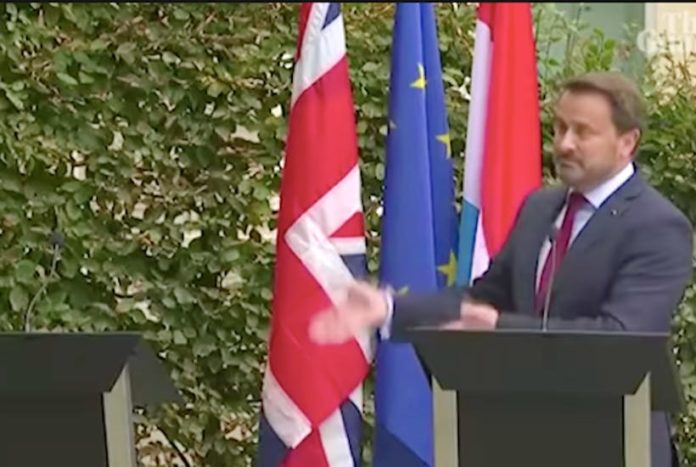 Xavier Bettel, the Prime Minister of Luxembourg, yesterday gave a press conference beside an empty podium intended for Johnson. In one of the more dramatic spectacles of the ongoing political drama, Bettel took the opportunity to express his frustrations at Brexit while gesturing to the empty podium.

The joint press conference between Bettel and Johnson had been due to take place outside, but it soon became clear that a loud gathering of anti-Brexit demonstrators at close range would have drowned out Johnson’s speech. As no indoor options were forthcoming, Johnson pulled out of the press conference and spoke to journalists separately.

Bettel proceeded with the conference alone and took the opportunity to deliver a condemnation of the current political uncertainty. Beginning with an account of the EU’s position (that no Brexit extension would be granted ‘without a purpose’), Bettel then gave an impassioned speech which placed the blame squarely at the feet of Johnson and the UK.

‘This Brexit: it’s not my choice! […] These are home-made problems, and we have now all to deal with th[ose] home-made problems […] You can’t hold the future hostage for party political gains, so now it’s on Mr. Johnson.’

Taking advantage of the imagery of the empty podium, Bettel gestured towards it before announcing that “we need written proposals and the time is ticking”. To cheers from amongst the ‘Stop Brexit’ and ‘Bollocks to Boris’ banners, Bettel affirmed that “I won’t accept any time to be responsible as European leader, neither the Commission, nor the 27 other countries, for, I’m sorry, the mess we are in for the moment. [sic]”

The spectacle followed a ‘working lunch’ at which Johnson and Juncker discussed the state of the negotiations. Although the European Commission spokesperson said afterwards that the government had still proposed no “legally operational solutions that are compatible with the withdrawal agreement”, there were signs of potential goodwill in an agreement to hold further discussions between Brexit Secretary Stephen Barclay and the EU’s Chief Negotiator Michel Barnier.

As so often in these divided times, the interpretation of events has tended to correspond tightly to existing opinions on the EU and Brexit. The Guardian referred to a “humiliation” and The Independent reported that Johnson “chickens out”. By contrast, The Daily Telegraph interpreted the conference as an “ambush”, while The Express went further and saw the “anti-Brexit stunt” as further validation for Britain’s decision to leave the EU.