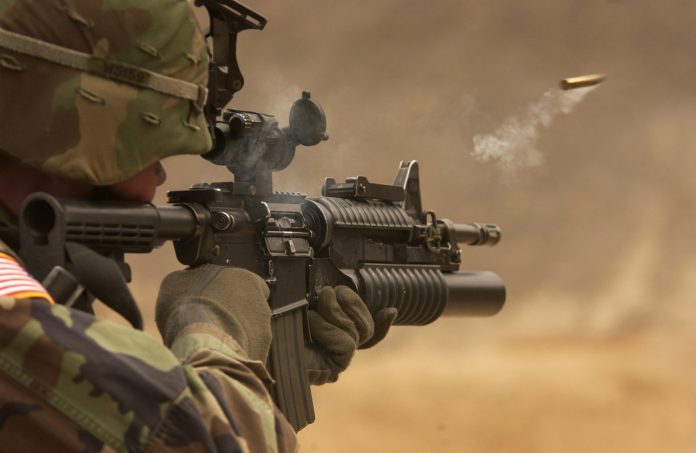 London mayor Sadiq Khan has told organisers of the ‘world’s biggest arms fair’ to “get out of London”.

Police made more than 116 arrests during protests leading up to the start of the three day event held at London’s ExCel in Custom House.

London mayor Sadiq Khan sent a letter to the event organisers, Clarion Events, stating he will “take any opportunity” to prevent the biennial DSEI (Defence and Security Equipment International) from being held in the capital in the future.

“London is a global city,” wrote Khan to the DSEI Event Director, Grant Burgham, “which is home to individuals who have fled conflict and suffered as a consequence of arms and weapons like those exhibited at DSEI.”

The Labour mayor also outlined the costs of policing the event, which in 2017 involved more than 2,800 shifts over 12 days estimated at around £1 million.

He added: “In order to represent Londoners’ interests, I will take any opportunity available to prevent this event from taking place at the Royal Docks in future years…and in the meantime that you will look to cover the costs of policing the event incurred by the Metropolitan Police.”

Clarion Events disputed Khan’s claim with a spokesman saying: “DSEI pays for 100% of the cost of the event’s security and policing and always has done.

“This includes the attendance on site of Ministry of Defence Police, who have a specific responsibility for protecting British military personnel and equipment.

“Their costs are paid in full by DSEI. DSEI does not require the attendance of the Metropolitan Police on site.”

Commenting on the protests outside the ExCel campus, the spokesman added: “It is the Metropolitan Police’s decision alone as to whether they attend and what level of resourcing is required to police these events.

“It is worth noting that these protests cover a wide number of political issues, such as Brexit and climate change, and the Met has a statutory responsibility to police them, as they would with any other public protest.”

The London arms fair boasts more than 1600 exhibitors, 40 international pavilions, 50 countries, 300 speakers and anticipates in excess of 35000 visitors to the event which continues until Friday, September 13.

The government announced record arms sales last year of £14bn, 80% of which were sold to countries in the Middle East.

In June, the Court of Appeal ruled that continued licensing of weapons to Saudi Arabia was “irrational and therefore unlawful”. The UK government is appealing against the ruling.