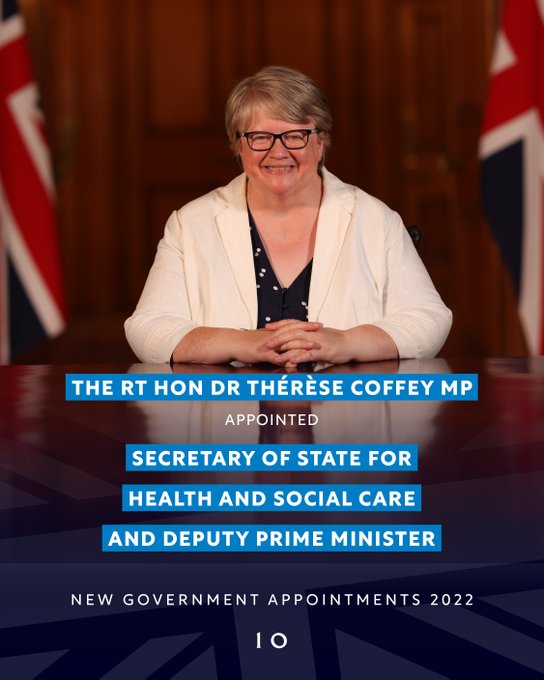 Liz Truss has appointed her close friend, Thérèse Coffey, as the new health and social care secretary. Pay disputes and growing waiting lists are but a few of the system’s problems she will have to tackle. Known for her forceful nature, Coffey has already laid out her plan to steer the NHS out of crisis.

Long-time friend and ally of the new PM, Thérèse Coffey, has been appointed deputy and is set to be the third health and social care secretary in the space of two months. She inherits a health system in crisis and will have to tackle problems on multiple fronts.

Coffey told Radio 4’s Today listeners that she was “conscious of the huge challenge that the NHS is facing”, adding that her “attention to delivery and detail” at the Department for Work and Pensions had propelled her into heading up the Department of Health and Social Care.

Before meeting Amanda Pritchard, NHS chief executive, she said their meeting would be about finding ways to “fix the systems so that patients come first” rather than “a blame game.”

When accepting her new role, Coffey outlined her priorities:

“Patients are my top priority, as we focus on ‘ABCD’—ambulances, backlog, care, doctors and dentists.”

But the BMA retaliated by demanding  “EFG’—ending attacks on the profession, fixing pension rules that are forcing doctors to leave, and giving doctors back the pay they have lost since 2008.”

Professor Philip Banfield, BMA council chair told reporters that Coffee took on her role at a time the NHS is “in greater crisis than any of her predecessors”. The head of the BMA went as far as calling Coffey “bizarre” after she claimed that NHS staffing levels were at a record high even though the NHS currently has 132,000 vacancies:

“It was somewhat bizarre to hear the new Health Secretary talk of record numbers of staff in the NHS when we have 130,000 vacancies in secondary care in England alone and have lost the equivalent of almost 2,000 full-time GPs in England since 2015 when the Conservatives began pledging to recruit 5,000 more.

“For patients waiting for hours on trolleys and in ambulances, or struggling to get an appointment at their practice, or the healthcare workers battling to provide care amid rota gaps and workforce shortages, these comments will seem completely out of touch.”

The problems in the NHS are multifold. To begin with, the waiting lists have reached record levels with one in seven people waiting for routine care. Ambulance waiting times are presently longer than ever, and the possibility of strike action across many sectors of the NHS is growing. Health unions are balloting staff members on strike action over pay.

Thérèse Coffey outlines her plans for the NHS

“There are actually thousands of people currently in hospital today who don’t need clinically to be in hospital that need that care for once they leave hospital. That’s why this combination of focusing on social care and health is going to be critical.”

Responding to the PM’s promise to take “immediate action” to ensure people across the UK can see their GP, the BMA’s Professor Banfield said:

“If they want to make a real difference, they need to understand the severe crisis the whole health service is in, and the unprecedented pressures these same doctors and their colleagues are under in an understaffed and under-resourced system. While the Prime Minister says she will make sure everyone can get a doctor’s appointment, you cannot create extra appointments out of thin air, or without the doctors to do them.”

The social care system faces the possibility of hundreds of care homes shutting their doors because of unbearable energy costs. Some have seen their energy bills rise ten-fold. Care England has urged the government to extend the £400 energy rebate to people living in supported housing. This would put them on an equal footing with people living at home.

Professor Martin Green, Care England chief executive told iNews that they had delivered a blueprint of immediate action to the government that would stabalise the entire sector.