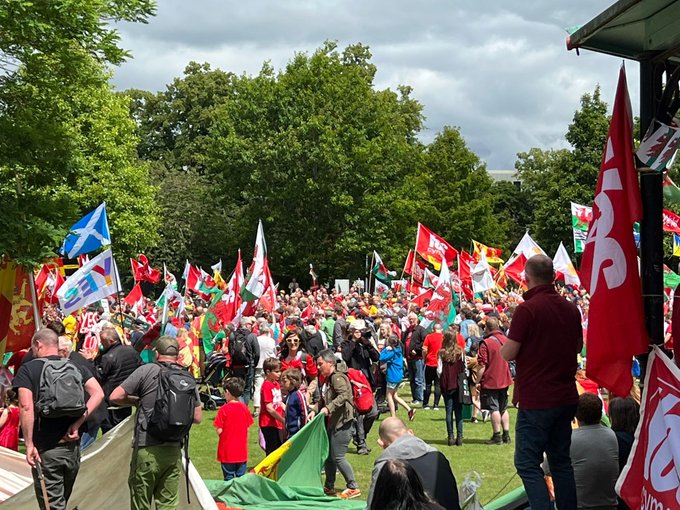 As Scotland moves toward a second indyref, calls for Welsh independence are growing louder. On top of that, a vote on uniting Ireland, north and south, is also likely in the not too distant future. But what does that mean for the union? Indeed, is it time to have that discussion? On Saturday, thousands took to the street in Wrexham calling for an independent Welsh state. Indy First Wrexham, Yes Cymru, and All Under One Banner (AUOB) joined forces to organise this, the first post-pandemic event of its kind. Organisers said it would allow people to show that they wish “to go in a different direction”.

Initially, some council members had said that marching right in front of their offices in Guildhall represented a breach of policy. However, the council was unable to stop the march from proceeding. The official attendance at the march remains uncertain with some reports suggesting 3,000 people participated, while the AUOB claimed 6,000 – 8,000 took to the streets to demand Welsh independence.

One of the organisers, Councillor Carrie Harper told the BBC that people were “more interested in that constitutional conversation… especially with a second referendum on the way in Scotland and widespread support for a unified Ireland.”

The march had been planned for 2020 but had to be postponed because of coronavirus. Indeed supporters admitted that the pandemic curbed some of the initial enthusiasm of the movement. Internal disputes within Yes Cymru are said to have lost the organisation as many as 9,000 members.

At Saturday’s event, however, supporters were upbeat saying this was an opportunity to put disputes aside and rejuvenate the movement. One participant told the BBC:

“I think it’s a growing movement. I think everyone knows it is.”

People from all over Wales travelled to Wrexham to march. This was the fourth event in support of Welsh independence. Also in attendance was broadcaster and comedian Tudur Owen. Speaking in favour of an independent Wales at the civic centre, he told the crowd:

“The case for independence has been made. We now need the consent of the people of Wales and that is our next challenge.”

“We can’t stand by whilst Westminster continues to impose inequalities on our nation. There is another way. A path where we carve out our own future. Pleased to stand in solidarity with fellow #WelshIndy supporters at the @YesCymru @AUOBCymru rally in #Wrecsam today.”

Price claimed that a second referendum in Scotland without Westminster’s consent could mean a potential path for Wales to a similar vote. But the Welsh First Minister, Mark Drakeford told the BBC that this only stood true if a pro-independence party won a majority of seats first. At the last Welsh Senedd election, Plaid Cymru only came third.

Last week, Nicola Sturgeon pencilled in a second referendum for 19 October 2023. With the UK government unlikely to consent, the Scottish government is hoping that the Supreme Court will rule that Scotland can proceed without Westminster’s consent.

Having made a Welsh independence referendum an election pledge during the last Senedd campaign, Price said on BBC Radio:

“If the Supreme Court decides in favour, we in Wales will have a route to go directly to the people of Wales in order to have a mandate for securing our own right to self-determination as a nation.”

Many Welsh politicians have been angered by UK government proposals to repeal aspects of Welsh trade union law, including Plaid Cymru and the Welsh Labour government. Plans to scrap the 2017 Senedd law have also come in for criticism from trade unions. But the UK government plans to roll out rules allowing agency workers to take over from workers on strike across the UK. Because of Trade Union Wales Act, Westminster, the proposed legislation will not apply to Welsh government-controlled services.

Drakeford expressed the widespread anger when speaking to the BBC last week:

“It just speaks volumes of the disrespectful agenda that this Westminster government has towards devolution and of course, we will resist it.”

Message of support for march from Mary Lou McDonald

“I wish you every success with your march today… you will always have friends here in Ireland. Above all, I wish you a future that matches the hopes and aspirations of the Welsh people.”

The next march is due to take place in early October in Cardiff.