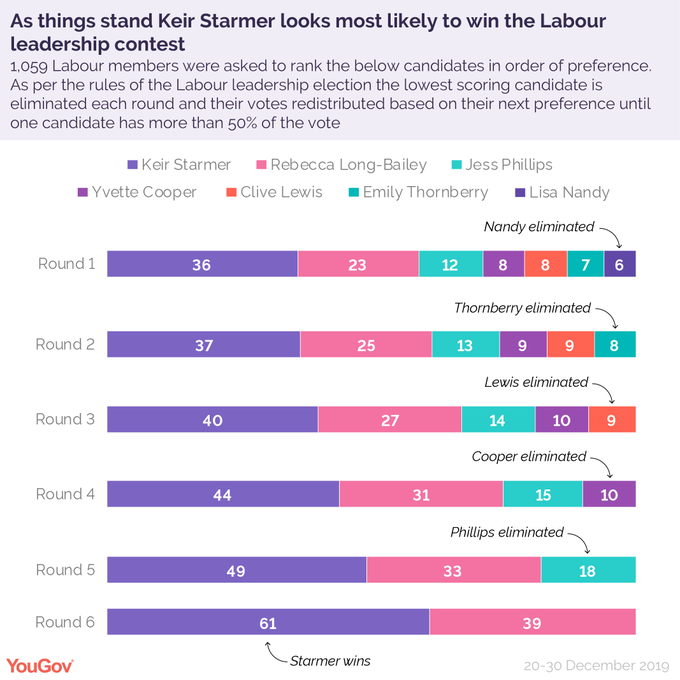 The Labour leadership contest is beginning to take shape with an early poll indicating that Keir Starmer will win comfortably. Mc Donnell protege, Rebecca Long-Bailey takes second place, and there’s little indication that the Labour party will put a stop to its internal divisions any time soon. Reports suggest that the results of this poll have put the party’s hard left into a spin. ‘Operation Stop Keir’ is on its way with some Labour members rumoured to be trying to delay the leadership contest to allow the party’s hard left to find a suitable candidate.

Dismal election results leave Labour as split as ever

Having suffered such a catastrophic defeat, one might think the Labour party would focus on healing internal strife. However, a bruising post-election analysis has left members and supporters arguing about the reasons for the worst Labour defeat in decades. While the left-wing of the party favours maintaining Corbyn’s main policies, remainers and the centre-right section propagate steering clear of them altogether.

Starmer is a staunch remainer and appeals to the more moderate element. The poll suggests he’s the favourite candidate among all age groups. Among those Labour members who feel the election manifesto is worth maintaining, Keir is hardly a suitable replacement for Jeremy Corbyn.

Although the precise timetable for the Labour leadership contest remains uncertain, the new leader is set to take over in spring. So far, only two MPs have announced their candidacy; Emily Thornberry and Clive Lewis.

Thornberry who opposed the pre-Christmas election has made it clear that the task is now to create a viable opposition rather than remain at loggerheads as to whether the Labour party ought to position itself on the left, right or centre.

Lewis is a wild card candidate who lost the whip for supporting Article 50. He said Corbyn failed to keep his promises to break away from Blair-Brown-style Labour policies while also stopping short when it comes to democratising the party. According to Lewis, Labour’s indecisive Brexit-policy is also part of the reason for Labour’s dismal election performance.

Both Keir Starmer and Rebecca Long-Baily are expected to declare their candidacies early next week. Long-Bailey has the support of many Corbyn allies as well as the founder of Momentum and the Unite boss. Poll frontrunner Starmer has vowed to put forward radical ideas while also appealing to a broader church.

The left-wing-dominated National Executive Committee will meet on 6 January to set the timetable and nail down the criteria and costs for candidate eligibility.