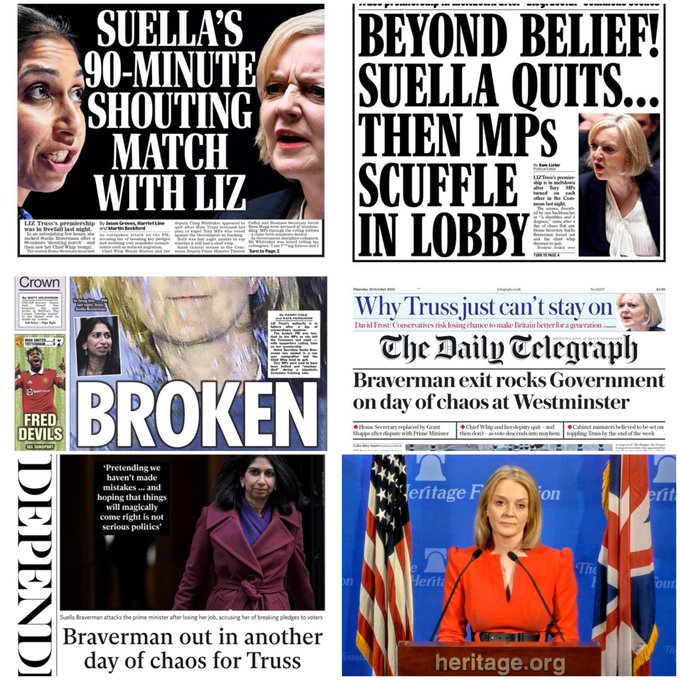 According to some MPs, the PM has 12 hours to save her job. Her position yesterday became even more untenable after the resignation of Suella Braverman. At this point, the Conservative party is in utter disarray. The trouble is, no one knows how this will play out. All options open appear to end in electoral disaster for the Tories. As many as 200 MPs fear losing their seat at the next election because to the public, the Tory party is an utter shambles. Between the damage, Boris Johnson inflicted on the party’s standing as a trustworthy entity, the ensuing divisive leadership battle, and the chaos in the aftermath of Truss’ election, Tory MPs have little to celebrate. Polls put Labour way ahead at present. After more than a decade in government, the conservatives are now a party divided having to grapple with the cost of living crisis, escalating inflation, market wobbles, and Brexit economic woes. In her resignation letter, Suella Braverman didn’t miss the opportunity to take a cold swipe at the PM.

Liz Truss’ premiership is hanging by a thread. Just how long she can cling to power is anyone’s guess. But it is hard to see how she could emerge from this crisis and carry on. Many backbenchers are furious, and even within the cabinet, little unity exists. The PM’s perilous position was sharpened by Suella Braverman’s resignation yesterday. The Home Secretary resigned after admitting that she sent an “official document from my personal email” to a colleague in parliament. In her resignation letter, Braverman took the opportunity to voice her opinions on the current chaos within the party:

“It is obvious to everyone that we are going through a tumultuous time. I have concerns about the direction of this government. Not only have we broken key pledges that were promised to our voters, but I have had serious concerns about this government’s commitment to honouring manifesto commitments, such as reducing overall migration numbers and stopping illegal migration, particularly the dangerous small boats crossings.”

In an obvious swipe at Truss, she wrote:

“Pretending we haven’t made mistakes, carrying on as if everyone can’t see that we have made them, and hoping that things will magically come right is not serious politics. I have made a mistake; I accept responsibility; I resign.”

Grant Shapps who supported Rishi Sunak during the leadership contest took over as home secretary yesterday.

After Wednesday’s tumultuous scenes at Westminster following the fracking vote, Sir Charles Walker, who has been a Tory backbencher for almost two decades spoke to the BBC.

🔥🔥 This is an extraordinary outburst from Charles Walker(Tory MP) 🔥🔥 pic.twitter.com/Hw1MSHcTFa

“Can the ship be turned around? Yes.

“I think today [and] tomorrow are crunch days.”

On BBC Radio 4’s Today programme, MP Crispin Blunt, who was the first to call for the PM’s resignation after the sacking of Kwasi Kwarteng, accused Truss of showing “a lack of self-knowledge”. Urging for a speedy leadership change, he added:

“We need to effect change today in order to stop this shambles and give our country that governance it needs under our constitution.”

According to speculation, the Sir Graham Brady of the 1922 Committee has already received enough no-confidence letters to allow MPs to oust the PM.

But Truss still enjoys the support of some MPs, among them, Transport Secretary Anne-Marie Trevelyan. When asked whether Truss should carry on, she said:

“Yes, she was selected through a long and tortuous process over the summer.. .by our members and that’s how the Conservative party system works to choose a leader and we stand firmly alongside her.”

However, she declined to say whether the current PM would lead the Tory party into the next general election.

A stock market expert has told the BBC that “markets are watching in a kind of stunned open-mouthed horror.” On BBC radio, Shard Capital’s Bill Blain explained how politics plays into market activity:

“The problem we’ve got is that the last couple of weeks have really destroyed the image of political competency and that’s one of the key elements to make any economy work.”

Reacting to yesterday’s political turmoil, markets increased government borrowing costs on Thursday morning. They had already spiked in the aftermath of the mini-budget but reduced again somewhat after Bank of England intervention and Jeremy Hunt taking on the role of Chancellor.