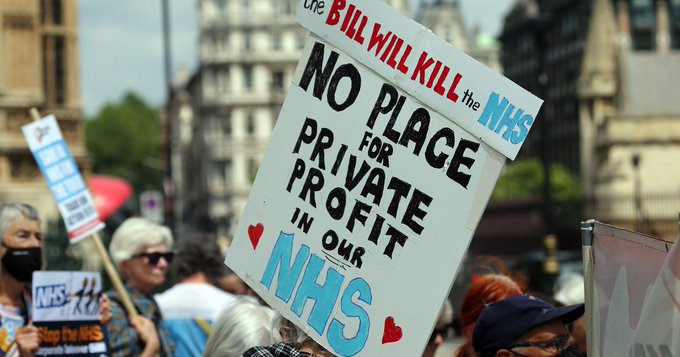 “The results suggest privatisation of healthcare is corresponding with worse quality care.”

Researchers examined 173 clinical commissioning groups (CCGs) and identified a 1 per cent rise in outsource-spending to be the likely cause of a 0.38 per cent increase in the number of treatable deaths. In concrete terms, this means one additional fatality in every 300,000 people. Medics classify deaths from avoidable medical causes, including some forms of cancer, as treatable.

Speaking to the Mirror, We Own It anti-NHS privatisation campaigner, Cat Hobbs said:

“Privatisation in our NHS is not just inefficient and wasteful, it’s literally killing people. It’s time to reinstate our NHS as a fully public service.”

Ever since the then Health Secretary, Tory MP Andrew Lansley, ushered in an era of part-privatisation of the NHS in 2012, for-profit health companies have taken on some of the NHS work. Today, £1 of every £20 spent on the NHS goes to pay for healthcare provided by private health firms.

The Oxford study examined the impact of outsourcing some of the NHS work. Pressure to hire private companies intensified through the introduction of the 2012 Health and Social Care Act. A detailed look at the amounts of money regional health bodies spent between 2013 and 2020 revealed a spending increase from 4 per cent to 6 per cent across England, although significant differences in spending between the regions were also noted.

During the said period, the government spend £11.5 billion on for-profit healthcare. This amount is likely to rise as the NHS is facing a Covid-backlog and 6.5 million people are on a waiting list.

But the authors of the study have expressed serious concerns over the declining quality of care the privatisation study uncovered:

“Our study suggests that increased for-profit outsourcing from clinical commissioning groups [CCGs] in England might have adversely affected the quality of care delivered to patients and resulted in increased mortality rates.” 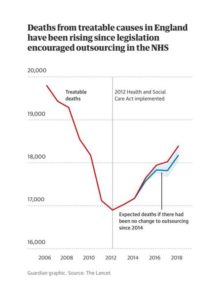 “Our findings suggest that further privatisation of the NHS might lead to worse population health outcomes.”

The researchers further agreed that the 2012 Health and Social Care Act “intensified pressures on the NHS to outsource service provision from state-owned providers to private, for-profit providers”.

This is not the first time, NHS privatisation has raised fears among medics. The BMA’s deputy chair, Dr David Wrigley told the Guardian after the publication of the Lancet research report:

“A policy of outsourcing with minimal oversight, governance or transparency is one which is going to lead to diminished quality and poorer patient care, which is exactly what today’s Lancet study shows.”

According to Dr Wrigley,  the doctors’ union had already expressed serious concerns on many occasions about the government spending “huge amounts of money at private firms rather than investing in rebuilding our health and care system”.

Despite strong indications, the researchers conceded that the findings do not conclusively prove that outsourcing directly led to a higher number of fatalities. The scope of the research had limitations meaning other factors may have contributed to the death rate rise.

“While more research is needed to determine the precise causes of the declining quality of healthcare in England, our findings suggest that further increases in NHS privatisation would be a mistake.”

“These results clearly have implications for the NHS privatisation debate, suggesting that increased outsourcing to the private sector could lead to a decline in the quality of care provided to patients.”

In a statement following the publication of the study findings, a spokesperson for the Department of Health and Social Care said:

“As the authors make clear, this analysis is not able to identify a causal link between mortality rates and the outsourcing of health services.

“The NHS will always be free at the point of use and will never be for sale to the private sector, and there has been essentially no proportional increase in NHS spending with non-NHS providers over the last decade.”