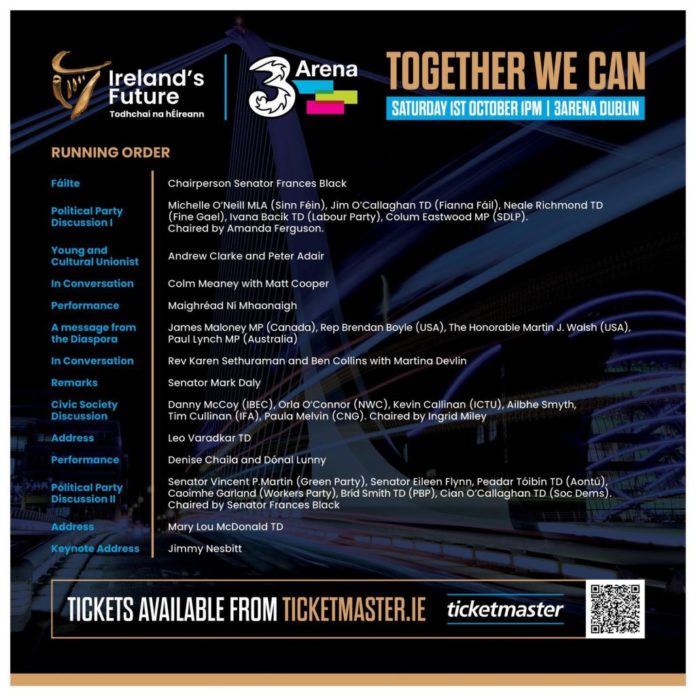 On Saturday, politicians, business representatives, and the general public are gathering at the 3Arena in Dublin for the “Ireland’s Future – Together We Can” event. The Alliance Party would have been the only non-nationalist party to attend but has now decided to reject the invitation. Party representatives have said that the party does not wish to attend “a rally to endorse a united Ireland” insisting it will continue to “engage in discussions around the future of these islands on a non-prejudicial basis, including a recent panel event for Ireland’s Future and through the Seanad Eireann consultation on the constitutional future of the island of Ireland”.

On Saturday 1 October, politicians from Northern Ireland, the Republic, the US, Canada, and Australia, as well as representatives from the business community and well-known voices from the arts and culture, are gathering at the 3Arena in Dublin for “Ireland’s Future”. The lineup includes members of all political parties in the Republic alongside the SDLP. No unionist speakers will feature, and the Alliance Party will now be the only non-unionist party not to attend. The event is to advance the process of shaping Ireland’s future and will no doubt feature calls for a border poll and earnest preparation for a possible reunification.

After recent Sinn Fein poll successes both north and south of the border, a united Ireland now seems within grasp for many. Politicians in the Republic have been tentative in expressing such hopes, keen not to alienate members of the unionist community. But even staunch opponents of Sinn Fein have recognised the need to, at the very least, initiate a conversation.

“Ireland’s Future was formed to advance the discussion about the constitutional future of Ireland. Since the organisation was formed in 2019, a wide range of civic and political voices have contributed to the conversation.

“Ireland’s Future has organised 24 events, both in person and online since May 2020. Over a hundred well-known figures from across Irish society and the international community have contributed, and over one hundred thousand people have attended the events or watched online. Public meetings have been held all over Ireland with a number of other events in London, New York, and Philadelphia.

About the event in Dublin, he said:

“We are looking forward to welcoming everyone to the 3Arena in Dublin on 1 October for what will be the most significant united Ireland event ever to be held.

“Anybody with an interest in a new and united Ireland should ensure they are in attendance for what will be a very special day.”

On BBC’s Stephen Nolan radio programme, Alliance Party deputy, Stephen Farry said that because Saturday’s event was billed in support of constitutional change, the party felt it inappropriate to attend, adding that he felt such a discussion wasn’t “the biggest priority for Northern Ireland at the moment.”

But former party colleague and now independent MLA, Trevor Lunny believes that sooner or later, the Alliance Party will have to declare itself either for or against especially when considering the growing possibility of a referendum on Irish unity. At present, the party refrains from either aligning itself with nationalism or unionism, as well as from stating an opinion on constitutional issues.

Although unionist contributors are absent from Saturday’s event lineup, one of the speakers, author Ben Collins believes the members of the unionist community are already having conversations about the possibility of a united Ireland:

“While political unionism rarely engages in the debate on Irish unity, I know from personal experience that people from unionist backgrounds are already taking part in this conversation. It may not often be happening out in the open, but these discussions are taking place.”

Some NI politicians have expressed alarm after Labour’s shadow NI minister, Peter Kyle said that if the circumstances were met, he would be ready to call a border poll. Under the Good Friday Agreement, a secretary of state must call a referendum if it is likely that the majority of voters will endorse leaving the UK. Unionists have been pointing out and holding on to the fact that the agreement does not outline specific criteria that need to be met to warrant a border poll.

The Irish government alongside Sinn Fein has been calling for clarity on such criteria. Although Sinn Fein emerged as the largest party in last week’s Northern Ireland census, Kyle said:

“We’re not even in that circumstance yet, so when we move towards the point where those circumstances set out in the Good Friday agreement start to emerge and it becomes a priority for the people of Northern Ireland, I will act.”

His comments angered some members of the unionist community.