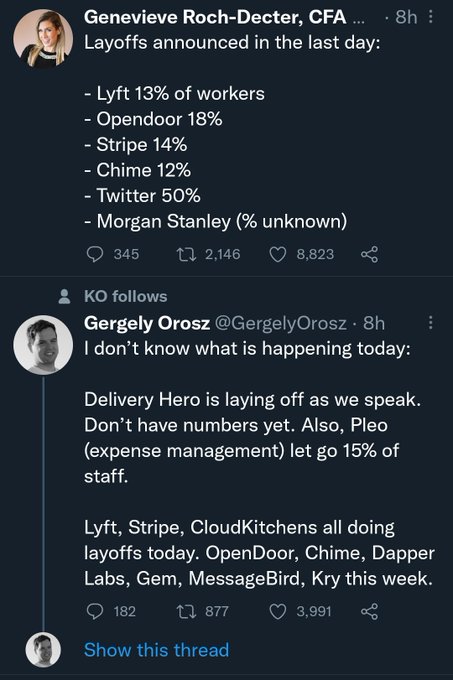 Having spent billions on research and development in the process of the creation of the metaverse, Mark Zuckerberg announced yesterday that the company intends to lay off more than 10,000 employees. Big tech job cuts have featured across many well-known firms, including Twitter, Microsoft, and Netflix, to name but a few. Analysts attribute the need to slim down to overoptimistic forecasts and a market hit with inflation and cost of living pressures. On the stock market, the tech giants have experienced massive losses with Meta, for instance, seeing a 71%-drop in value this year alone. While Twitter and Meta plan on reducing their workforce, many other companies are returning to hiring freezes. And it is not just the global corporations that are experiencing lean times. Small tech companies and startups are also having to adjust to the global downturn. That said, smaller firms have been less susceptible to the economic downturn. Moreover, tech industry experts believe that much of the laid-off talent is being readily scooped up by agile startups.

After the purchase of Twitter finally went through, Elon Musk said that he would reduce the company’s workforce by half. Amazon, Apple, and Alphabet, the Google parent company, have stalled or slowed down hiring new staff. In an environment of sluggish consumer demand, most tech firms are slimming down their operations. After a decade of unprecedented growth, industry leaders are more cautious and less willing to push for further expansion. This new approach is a direct consequence of negative earning report figures. Microsoft, Apple, Alphabet, and Meta plunged way below their projections. Markets reacted by reducing share values by billions of dollars.

It was neck-and-neck between Microsoft and Amazon earlier this week in the race to record the biggest market losses in history. In the end, Amazon reached the $1 Trillion value loss milestone. Microsoft wasn’t far behind with an $889 billion value drop. According to Bloomberg, these enormous losses are a result of poor earnings, tighter monetary policies, and rampant inflation. Throughout this year, tech stock values have been dropping, and the fear of a possible recession appears to have exacerbated the situation. This year alone, the five biggest tech firms in the US have seen $4 trillion in market value go up in smoke. Jeff Bezo’s wealth has fallen by $83 billion and now stands at just over $100 billion.

Last month, Microsoft confirmed its intention to lay off more staff on top of the 1% reduction in the workforce announced some months ago. Demand for PCs is down, leading to the company reporting the lowest quarterly revenue growth in five years. The tech giant is, however, selective when choosing layoffs. A spokesperson for the company told online tech publication, The Verdict:

“With the focus on growth, Microsoft is likely focusing any hiring on individuals who can make an immediate and short-term impact on the business. Sadly, like we’ve seen recently with Meta, this is usually at the expense of more junior and entry-level talent.”

Among the other tech giants, Salesforce has slowed down its hiring drive, while Netflix and Coinbase are in the process of slimming down their workforce. Paypal announced layoffs of 300 at its headquarters, and Stripe followed suit saying that the company intends to cut its workforce by 14% globally.

The tech sector went through significant job losses before. When the dot-com bubble burst in the early 2000s, around 150,000 workers were laid off two years in a row.

In fact, even in the face of the big tech job cuts, IT industry job market trends remain positive.